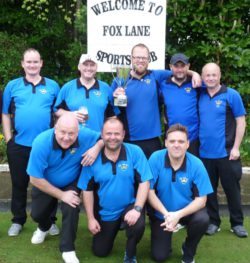 KING GEORGE V collected the first piece of silverware of the BCGBA season to lift the PITCHCARE World Club Championship trophy at Leyland Fox Lane Sports & Social Club. The Warwick & Worcester outfit, runners-up to St Josephs in 2013, went one better in 2017 with a comfortable 30-chalk victory over the 2015 champions, Thongsbridge (Yorkshire).

Both sides shared the opening four blocks of the final but Chris Kellyâ€™s 21-9 card for Thongsbridge gave his side a slender 7-chalk advantage at the halfway stage. Â King George V responded by dominating the second half of the final, claiming all four winning cards. Paul Wardâ€™s tremendous 21-2 success ensured the trophy would be travelling down the M6 for only the second time in the competitionâ€™s seven-year history following M & B Cheslyn Hayâ€™s (Staffordshire) triumph in 2014.

Kings George V reached finals day on the last of the four Sunday qualifiers where they defeated Belvedere (Derbyshire) by 13 and
Norton Central (Potteries & District) by 61. Â Their first final day opponents were the 2012 winners, Lloyd Hotel (Cheshire), and after
scraping past them by 5 chalks they booked their place in the final at the expense of Newdigate (North Midlands) by 33.

Thongsbridge easily accounted for fellow Yorkshiremen, Crossgates, by 27 in their opening match then produced a tremendous performance to defeat the current holders, and favourites, Parkfield Labour by 16 in their semi-final. Andy Cairns, playing against his North Lancs & Fylde colleagues, got his Yorkshire side off to a perfect start with a 21-7 success.