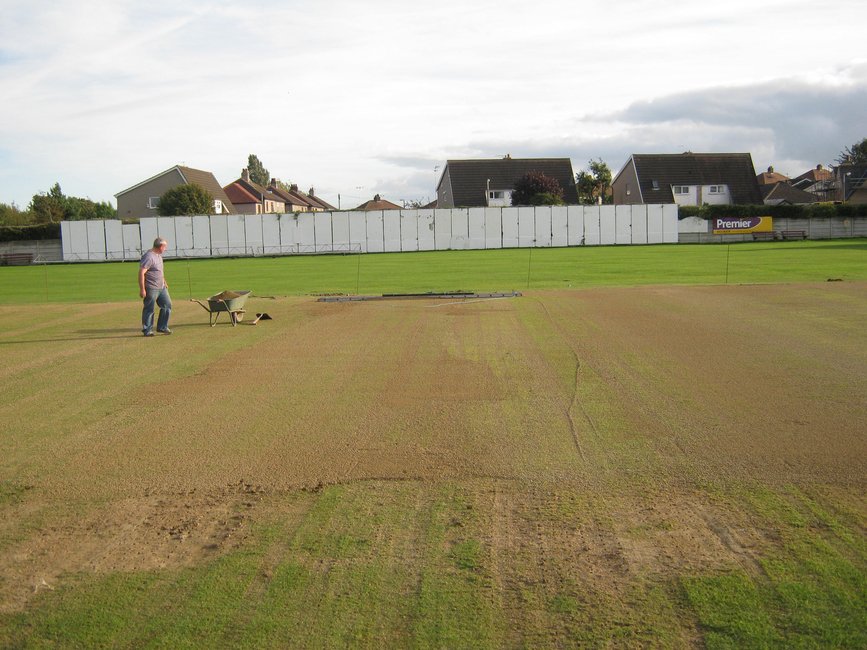 We've had a couple of requests for autumn renovation advice from those cricket clubs on the tightest budgets, and thought we'd put a little something together.

Based on information from technical experts present and past, the below is a summary of what a small cricket club should aim to achieve via end-of-season renovation.

There are very few methods which groundspersons usually use to attempt to achieve these results, but there are potentially many more, if we're prepared to get a little creative.

After these three major aims have been achieved, there are some other factors we may consider tackling - but, must be prepared to do some analysis to figure out whether they're needed.

Although there are more protective ways to remove a turf sample, taking any cutting instrument (like a knife, for example) down to about four inches will do just fine.

A small sample of turf can show excessive compaction (via cracking, lack of visible granules, or a levelled dark-light colour contrast even when dry), not enough compaction (via crumbling apart, or too many visible gaps), root depth and density, and how much thatch is in the upper layer.

As we always say: "the perfect amount of thatch in a pitch is none". This is why scarification or verti-cutting are essential before the sward is deadened by winter.

This is a tough one to comprehend, because thatch tends to strangle the progress of more helpful grasses like ryegrass, whilst not affecting poa annua as much. Meanwhile, those helpful grasses do contribute to discouraging poa due to lateral space.

Though it sounds counterintuitive, it is a basic building block which helps to cover two of those main renovation aims i.e. better and more grasses, and less surface matter.

Finally, and perhaps the most difficult on a budget, is the issue of surface levelling. This can be achieved partially in one season, but the most beneficial long-term factors are ones we should be implementing now to save ourselves work in the future.

An often-overlooked factor in the long-term maintenance of an even surface is the ability for loams to interact well with each other. This is a powerful tool available to those with little funding.

Of course, selecting a loam which is appropriate for local soil types and weather patterns is crucial, but it is important to weigh this against the harm which can be caused by drastic changes.

That is: if your facility's previous groundsperson was using what you feel to be too soft a loam, for example, immediately laying a year's worth of Ongar will result in a top-heavy, unstable surface.

Conversely, if there is already a layer of compaction a couple of inches down, laying an entire topping of Surrey is likely to lead to a two-tiered surface, which in turn can cause incompatibility issues such as cracking or moisture sponging.

Another way to combat this is by the distribution of topdressing material. While it may be tempting on a restricted budget to merely topdress around the foot-hole areas this will, over time, lead to a lack of evenness. Just lay a little, tapering to about five yards from each end.

For those clubs without much machinery, a deep topdressing effect can be emulated with hand tools. This, just as it would with a drilling machine, allows material introduction while resisting lateral movement and uneven compaction.

Naturally, however, don't be so ambitious as to assume this is practicable over dozens of pitches; just isolate your best few and give yourself a full day, while simply topdressing the rest - and bring a helper with an identical tool, as this will combat immediate undersoil slippage.

If you're looking for a slightly easier approach, hollow coring with a rolling corer can be handy. Just make sure you get the topdressing on straight away, and that you don't go too deep. Both can lead to insufficient amelioration.

This remaining surface can be really helped by a levelling lute, which really is a bargain product at less than Â£100 for a decent one. If you can't splash that out, a gardener's version is about 20-quid.

Further, it is essential to scarify at a variety of angles, as exactly square patterns formed by crosshatching can dredge up chunks of turf, unsettling the surface.

Overseeding mistakes are the obvious culprit when looking for growth errors in renovation judgement, but this isn't where the buck stops.

To point out what may be obvious: overseeding isn't rocket science. We want even spread, decent depth - though never below a few mm, and enough density to maintain our desired sward.

For this job, a sarel roller is perfect, as it allows for a consistent width of spiking as would a machine. However, a hand fork will do the job competently.

To apply the seed, a dimple-seeder is the ideal tool. However, scarification grooves make for a reasonable substitute.

If you plan on brushing the seed in, consider a final run-over with a rake, followed by raking some rootzone - you only need a tiny amount - to aid contact. The first raking is just to provide softness.

It also may go without saying that the seed type is crucial. It's rare that you'd want anything but perennial ryegrass, but it might be worth considering occasional fescue, if your area has a dramatic lack of rain, or if the pitch drains excessively well or suffers from unusually high levels of shade.

To ensure low levels of organic matter is, essentially, also to improve the likelihood of good coverage and to avoid the growth of poa annua.

Our weather is generally poa-friendly, and there is such a thing as the poa-thatch cycle i.e. one leads to the other, then they cause each other indefinitely.

Because our weather is so, the poa growth is easier to control via long-term solutions than short-term reactions. You can see the danger inherent in this trap.

It is both of these factors, the weather and the thatch, which contribute to the famous English 'slow and low' wicket archetype. The logic stands, therefore: prevent thatch => prevent poa => prevent poa-thatch cycle => prevent slow and low pitches.

The only truly important factor in whether to scarify or verti-cut is whether the thatch has built deeply into the surface.

If it's really got down there, say, over 20mm, this year might require deep scarification. If there's only a surface layer, consider verti-cutting throughout the season instead, or even just a particularly firm sharp-raking if you don't have the cassettes.

Should you work for a smaller club and opt to scarify deeply, you may not have access to super-handy products such as the Rotorake.

If you do, though, you'll certainly have been told what to do with them. They will save heaps of time. Try not to use these more than three times per year. Each use risks unsettling most surface types.

Err away from overfeeding and overwatering pitches during autumn, as this can be more beneficial to unwanted grasses

You can use the dimples from scarification to seed if you have to - but, again, give it a bit of rootzone afterwards if you can afford to

Remember to brush and collect after the scarification process is complete, or else you're just being self-defeating

If you have your mind set on the introduction of a new loam, keep some of the old one around and slowly increase the integration of the new one year-on-year

Feed once before seeding, then continue to feed lightly over the winter, focusing on low-nitrogen fertilisers which will harden and aid recovery

Keep irrigating until the roots are properly established after germination, as moisture is even more essential to the plant's health in its infancy

Above all, it is best to remain creative and open to the use of smaller tools to achieve similar effect to larger machinery, and to accept that high-quality renovation can still be achieved, assuming we allow ourselves an extra couple of days to make up for that deficit.

And if your surface is either very compacted, very loose, or multi-tiered, do consider saving up to rent an aggressive re-turfing tool like a Koro or related fraize-mower.

Again, renovation is all about improving your surface whilst also investing to avoid further work in future. Turning the turf just once can be the difference for years to come.

Check out the Grounds Training website to view our selection of Online Lantra accredited courses: here